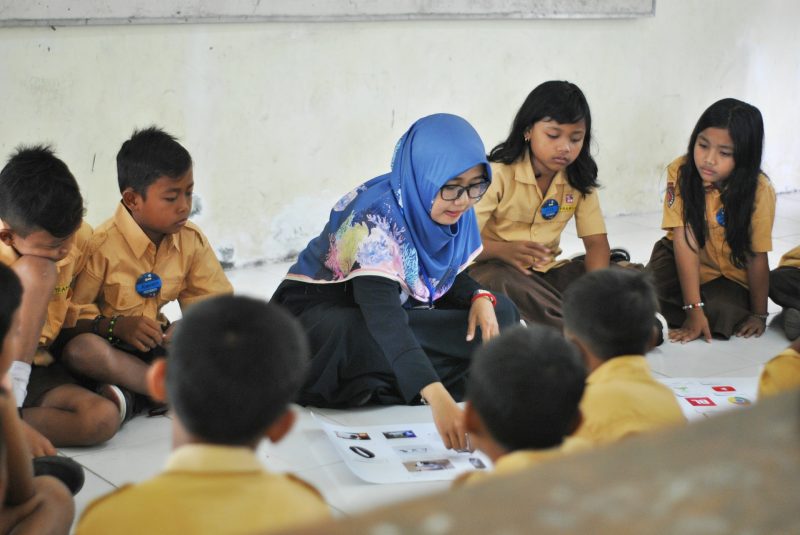 Have you found it difficult to teach the R sound to your English students? Or perhaps you’ve had students who avoid working on their pronunciation?

The R sound in English is a particularly hard one to teach and something that many students (and teachers!) seem to avoid for fear of overwhelm or discouragement.

Many students will find the R sound complicated at first, with its three types—initial, middle, and final—and six vocalic variations—/ar/, /air/, /ear/, /ire/, /or/, and /er/—but with a good lesson structure and effective drilling, they’ll get the hang of it in no time.

In this article, we’ll explore how you can use the effective ESA method to make teaching the R sound a breeze. And don’t worry if you don’t use the ESA method, there’s still a load of useful information you and your students can benefit from!

How to Teach the R Sound in North American English

The ESA method—engage, study, activate— is just one of many and by no means the best method out there. It’s simply one that’s worked well for me and my students. Be sure to tailor your method and material to your student’s needs and goals.

Engage: open with a warmer activity to engage your students

Some English topics just aren’t that fun to learn compared to others, and that’s fine. But, any good English teacher knows that warming up your students with something engaging first has a huge impact on the rest of the class.

The focus of this stage is about getting students eager to learn so don’t worry too much about how effective the material is. As long as it primes their minds with the R sound, it’s doing its job.

The American /R/ sound is difficult to make and a source of stress for many students. Especially those whose native language doesn’t have a similar sound at all.

Try showing a couple of silly or funny phrases that contain the different R sounds. Even better if they’re tongue twisters! The idea isn’t that the student understands and pronounces the phrase perfectly straight away, rather, that it just gets them thinking about the R sounds and saying them out loud.

You could also show some words and say them out loud in both British and American accents and get the students to identify which is American. It’s a simple but effective way to exercise the part of the brain responsible for language learning.

Some other warmers you can try:

Particularly good for the R sound as the minimal pairs R+L and R+W pose a problem for some students.

Everyone’s favorite vocabulary game! I honestly haven’t met a student that doesn’t like stop. It’s challenging and deep down we’re all competitive.

Put similar words into groups of three or more, with one sound being different but similar.

Ask the students individually to read through the word groups and pick which words have different sounds. Alternatively, ask them to discuss the groups of words with a partner and decide which one is odd.

For more warmer ideas, check out this FluentU article on 10 ESL activities to teach perfect pronunciation and get mouths moving.

Study: explain the three types of R and its eight sounds

It’s beneficial to get the students thinking about the three types of R and its eight sound variants from the start, starting with Initial R.

Be careful not to over-explain with images and diagrams here. You don’t want to give your student the chance to overthink and become confused.

The focus here is on comprehension of the target language.

The main points to cover here are:

Here are a couple of sample phrases you can repeat a few times, then get the students to try:

The main points to emphasize here are:

Some phrases to drill the middle R sound:

The main points to cover here are:

Here are some phrases to emphasize the vocalic R:

Are you already incorporating videos into your English classes to captivate your students? Check out Creativa’s deep-dive course Mastering North American Pronunciation for a wealth of ideas on how to teach native-level pronunciation for every sound in English. There’s even an entire video episode on the R sound with worksheets and step-by-step instructions! Click here for a free video from the course.

The mouth and tongue positioning is typically what’s most difficult for students to grasp, especially if they’re native speakers of French, Spanish, or an Asian language, where the R’s are rolled or the sound doesn’t exist at all.

After explaining the types of R to students, you can now emphasize the mouth movement using complementary visuals.

Use a sample phrase to explain the following with exaggeration:

Teaching Students to Distinguish Between R and L and W

Many students will have issues differentiating R, L, and W sounds. This is particularly evident in children but it’s also present with adults that haven’t had adequate explanation of the correct mouth movement.

It helps to drill with a phrase or minimal pairs that contain /W/ and /L/ sounds so the students can get used to the differences.

The R can be so soft at times that it sounds like /W/.

Some minimal pairs to practice the differences:

Again, confusing /R/ and /L/ sounds is mainly present with children and speakers from Asian countries, as some Asian languages have a somewhat combined /L/ and /R/ sound, or no /R/ at all.

Some minimal pair phrases to practice the differences:

All of this can be a lot of information for the student to take in, depending on how you approach the class. So, it’s essential to drill the information, so it sticks.

And no ‘study’ portion of an ESA class is complete without, well, studying the information!

Consider giving the students a verbal quiz or worksheet that challenges them to correctly identify the /R/ sound’s rules and mouth movements.

You can also get students to work in pairs or groups with word games or word search worksheets that require them to identify and vocalize different R sounds.

Remember to dedicate enough time to this portion of the class! Around 20-25 minutes is perfect. This part of the class helps solidify concepts so students can take what they’ve learned to the real world, sooner.

The focus of this stage is on communication and fluency.

Verbal exercises like reading out a text out loud or tongue twisters can help to solidify the theory that you’ve taught your students. The quicker they grasp the idea of the correct mouth movements for pronunciation, the better.

Try integrating these common activities with emphasis on the R sound:

Sometimes it’s important to leave the students with some important “takeaway” ideas that don’t necessarily need too much class time, or it’s simply better left until the end to avoid confusing the student.

This doesn’t require too much explanation or practice. Show some words that feature RR and WR and explain that they’re simply the same pronunciation.

Reiterate what to listen for with British vs. American pronunciation

In British (UK, Australian, Caribbean, etc.) English, the R is only pronounced at the start of a word or when followed by a vowel, like in courage.

The final R just sounds like an extension of the vowel sound before it.

In a nutshell, the success of your lesson teaching R pronunciation lies in your students being able to grasp the right mouth movements early on. But don’t stress if they don’t. After all, each student is different and how quickly they pick up new pronunciations is not an indication of how well they’ll speak English overall.

Consider leaving your students with activities or worksheets that they can revisit at home and help solidify the important takeaway points they learned during class.

Revisiting after a short pause is always an effective way to make new information stick!