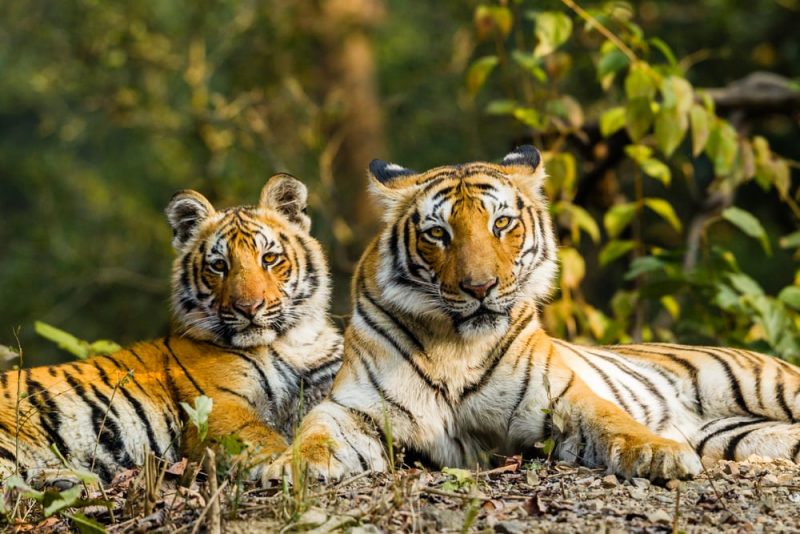 “The tiger was sitting down, but it looked at me as if ready to attack. Even though I’d just drank water, my mouth went dry.”

This is only a couple of sentences, but the letter T appears more than ten times – and it’s pronounced here in five different ways. The T in tiger doesn’t sound the same as the T in water.

In English, this happens a lot. Although English only has 26 letters, some letters can have more than one possible sound, depending on how they’re placed in a word.

T is one of those letters – and it’s common too, appearing in practically every sentence.

In this blog post, we’ll unpack how to pronounce T, complete with specific steps and example words and sentences.

The Letter T in English

Figuring out how to pronounce each letter is probably one of the first things that most English learners try to do.

When you read the English alphabet out loud, there’s one sound associated with each letter. However, it becomes a different story when those letters combine to form words. Some letters can become silent or even sound like other letters.

With the letter T, there are three main ways to pronounce it in a word:

These also apply when you see a double T spelling (TT) such as in words like “watt” and “butter” because it’s essentially the same sound. What’s not included are special cases such as when T is part of the letter combinations TH or TION.

All of the three ways to say T are recorded in the International Phonetic Alphabet as the /t/ sound, but when you listen closely to native English speakers, you can hear the difference.

Native speakers might not even notice that they’re pronouncing their T’s in more than one way because it’s very intuitive for them. However, they can easily notice it in how other people speak. If you don’t vary how you say your T’s, your English can still be understandable, but it won’t sound exactly like a native accent to them.

At the same time, there are a lot of native English accents out there, and even within the same country – such as the US – people may speak English differently. The three variations of T listed here just happen to be the most prominent. In fact, they can make your English accent sound much more North American.

Aside from “T,” there are many more letters like this in English. You can get a solid grasp of them in one place: the Creativa course on Mastering North American English Pronunciation. It has an entire video episode that’s all about how to pronounce the letter T in its most common forms.

Through engaging, high-quality videos, the course shows you exactly how to sound like a native English speaker, from distinguishing between the most confusing English sounds to linking words together for smooth speech. Check out this free video for a preview.

How to Pronounce T

Let’s go over each of the three main T sounds in English:

This is the normal way to pronounce T. It’s the first T sound that English learners pick up, and it’s most often used when the letter T is at the start of the word.

How to Pronounce the Standard T

The standard T is described as an unaspirated sound. What this means is that there’s a puff of air “escaping” from between the teeth. It also has an audible snap to it.

To pronounce it, put the tip of your tongue just behind your top teeth, in the same position as if you’re hissing ssss like a snake. Now try pushing a puff of air out – you should hear a snapping sound. You know you’re close to the right pronunciation if you can feel the puff of air hit the inside of your lips.

Since the standard T is also voiceless, you can put your fingertips lightly on your throat while saying it. There should be no vibrations since you’re not using your vocal cords.

When to Use the Standard T

This is the easiest use case of standard T to remember. Try saying the underlined words first on their own using the standard T, then read the rest of the sentence out loud:

2. At the start of a stressed syllable.

When T is part of these consonant clusters, it’s pronounced as the true T, regardless of where it is in the word.

The flap T sound sounds like a quick, hard D for English speakers. For example, the T in the word “butter” is a flap T, so the pronunciation will sound like “buder” instead. You’ll usually find the flap T in between two vowels.

Out of the three ways of pronouncing T, this is probably the trickiest. It might be easier to try pronouncing an entire word first rather than only the flap T sound – you can practice on “butter” or any of the example words below. Try saying it as “buder.”

When you’ the flap T sound, your tongue will stay behind your teeth while tapping the roof of your mouth, with the tip rolled back slightly. You know you’ve said it right if it sounds like a very hard D sound.

Note: If your first language is Spanish or Arabic, you might hear this as an “R” because of the similar tongue position!

When to Use the Flap T

The vowels in English are A, E, I, O, and U. However, pay attention to the sound of the word rather than the spelling.

In words such as “eight,” the T comes after a consonant (H) if you’re only looking at the spelling. But “eight” is pronounced as /eyt/, with the GH silent. Because of this, the T in “eight” actually comes after a vowel sound, which is /ey/.

This also works between words. The T might be at the end of the word, but it still becomes a flap T because the next word starts with a vowel.

2. Sandwiched between R and a vowel sound

Aside from the five main vowels, the letter Y is also usually a vowel sound if it’s not at the start of the word. For example, the word “martyr” is pronounced as /mahr-ter/. The “Y” is pronounced as /e/, so we would still use a flap T for this.

The Stop T often happens when the T is at the end of a word. It sounds more like a slight grunt, with a skipped beat in the word instead of saying T fully.

For stop T, your tongue will be in the same position as when you’re forming the true T. The difference is that the air stops in the throat. There’s no airflow coming through, so the T sound isn’t audible. Still, you have to close or stop the back of your throat for a split second so the beat will be present in the word.

Don’t mistake it for removing the T completely, though! The T in “mountain” is a stop T, but you don’t say mounain–instead, it’s closer to moun_ain.

When to Use the Stop T

1. In a weak syllable followed by a vowel sound and a letter N

A weak syllable isn’t emphasized in the word. If we look at the word “curtain,” the emphasis is on “cur,” while “tain” would be considered a weak syllable. We would then use a stop T for “curtain.”

The most frequent usage of a stop T is when the T sound is at the end of the word (as long as the next word doesn’t start with a vowel).

3. End of a syllable on a word made of two others

A stop T can also occur at the end of a syllable.

Once you get the hang of these three main forms of T, your communication in English will be much clearer.

Distinguishing Between T and Other English Sounds

T and D can be a challenging pair if you don’t use both of them in your native language. These two sounds are regularly learned together because they’re both stop sounds. When you pronounce either T or D, you let out a puff of air through your mouth that’s partly blocked by your lips or tongue. This causes the audible snapping sound.

The difference, though, is that D is voiced, while T isn’t. With D, you can feel your vocal cords vibrating. There’s also less air blown out. If you put your palm in front of your mouth, there should be very little air hitting your palm when you pronounce D.

When you see the TH letter combination, that’s a different sound from T! In fact, TH has its own symbols in the phonetic alphabet:  /θ/ or /ð/, depending on whether it’s voiceless or voiced.

With TH, you can either put your tongue behind your front teeth or between your teeth. You’re still puffing air out, but you’re also letting out a hissing sound, unlike with /t/. A voiceless TH sounds like a combination of T and S, while a voiced TH sounds more like D and Z.

TION is another letter combination that’s helpful to be aware of. It’s often found at the end of words–for example, “imagination,” “foundation,” and “satisfaction.” Sometimes it also appears in the middle of the word, such as in “relationships.”

The T here isn’t pronounced regularly. instead, think of TION as “shuhn” instead. The T more or less turns into SH. The word “imagination” becomes “ih-maj-uh-ney-shuhn” when said out loud, while “foundation” becomes “foun-dey-shuhn.”

On top of what we’ve listed above, English can have more sound combinations or sound pairs that are confusing. For a detailed resource that explains these clearly, the Creativa course on Mastering North American English Pronunciation has got your back. Since it’s designed for English learners, it delves into areas of pronunciation that learners usually have a hard time picking up on.

Each video episode also features practical instructions, along with real-life examples and specialized tips that many English classes and books miss out on. After all, the clearer your accent, the better your English communication will be – and the more confident you’ll be talking to anyone in English.

Curious about it? Here’s a free video directly from the course.

Mastering the three main forms of T can seem like a subtle way to improve your English pronunciation, but you’d be surprised at how much of a difference it makes. While you can stick with only the standard T, your accent will be much more in tune with standard American English if you include all three forms of T – not only the standard T, but also the flap T and the stop T.