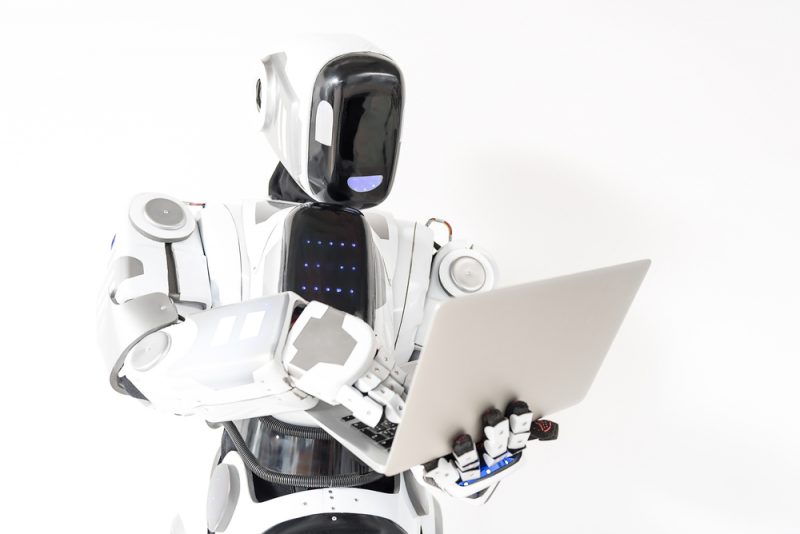 How can you tell apart a robot from a human?

Around 20 years ago, this question was easier to answer. When you talked to them, robots had a certain way of speaking: Hello. Human. I. Am. Happy. To. Assist. You.

There were sharp pauses between each word. It sounded unnatural, like you were playing a piano or violin and had to stop before every note instead of letting the music flow.

You might not have noticed it before, but in English, you don’t actually pause after every word. In fact, pauses can happen inside a word. While the difference can seem subtle, English speakers can hear it loud and clear. If you always pause between words, your English will sound choppy and more heavily accented.

Instead of pausing, you’ll have to do linking most of the time – letting one word flow smoothly into the other in certain cases. The most frequent type is linking consonants to vowels.

Read on to find out more about this important pronunciation feature of English. Once you apply this to how you speak, you’ll sound much closer to a native speaker.

What is Consonant-Vowel Linking?

Linking is when there’s no gap in between words when you pronounce them. You can think of it as a marriage of words, where they connect and slide into each other. Here’s an example of linking:

The phrase “Can I” is pronounced as if it’s only one word (“CanI”). For “some more ice,” linking also happens, and it becomes “suhmorice” – technically three words on paper, but no pauses in between when said out loud.

Try it out for yourself slowly right now, and you’ll discover that it’s a lot more natural-sounding.

There are three types of linking:

Once you get the hang of linking, you’ll be able to speak more clearly and understand native English speakers better too. For a handy resource that breaks it down for you step by step, check out Creativa’s course on Mastering North American English Pronunciation. There’s an entire episode that’s dedicated to linking, complete with detailed instructions and plenty of real-world examples.

Together with the other video episodes, the course delves into the building blocks of English pronunciation and intonation so you can sound like a native English speaker.  Curious about it? Here’s a free video directly from the course.

Linking Consonants to Vowels in English

Let’s be specific about what vowels and consonants are first:

Consonant-vowel linking happens when the first word you’re linking ends with a consonant and the next word starts with a vowel. The two words slide into each other.

Where would you put the pause? Without linking, you would pronounce it like this: “travel | again,” with the pause in between the two words.

However, the proper way to say this involves linking consonants to vowels.

Notice that the first word (“travel”) ends with a consonant, while the next word (“again”) starts with a vowel. A native English speaker would say: “tra | velagain.”

Aside from linking the two words, there’s also a slight pause before the linking – in fact, right in the middle of the first word. You can think of this as a beat inside words. We end up separating syllables inside a word to allow the C+V linking.

The easy rule is to put a small beat right before the final consonant sound of a linked word.

Check out these additional examples:

Consonant-Vowel Linking is All About Sound, Not Spelling

What about the following phrases – how would you pronounce them?

You would also link consonants to vowels for all of these!

With linking, it’s not about the word’s spelling but rather about the sound. The word “store” might end with e, but say it out loud and the “e” practically disappears. It becomes “stor,” with a silent e. The sound it ends with is “r,” which is a consonant, so consonant-to-vowel linking will still apply.

It’s the same for “manage” and “bottle,” both of which end with a silent e:

Practice Sentences for Linking Consonants to Vowels in English

Tips for Linking Consonants to Vowels

1. Be aware that linking can trump punctuation

It’s possible for English words to be linked together even when they’re separated by a punctuation mark. Consonant-vowel linking can override:

Linking across full stops is hard to see in formal situations, but it happens in very fast, spontaneous speech – such as when you’re chatting excitedly with a friend.

Before you can speak English well, you also have to be able to listen well. For firsthand examples, listen to videos or recordings of native English speakers and notice when they link consonants to vowels. You can even slow down the audio so you can catch it.

It might even be helpful to listen to English songs – especially during the chorus when words are drawn out and emphasized. You can get started with these popular songs:

Pronouncing each individual word correctly is an important part of speaking English, but it doesn’t stop there. English learners usually don’t notice linking unless it’s pointed out because the difference can sound very subtle. Linking isn’t as common in some other languages, either.

Although there are several kinds of linking, getting comfortable with linking consonants to vowels will instantly improve your English pronunciation. Just as notes are often connected together in music, linking allows you to speak in English smoothly and naturally. As much as linking makes English even quirkier, it’s a lot easier to pick up compared to grammar rules and silent letters!