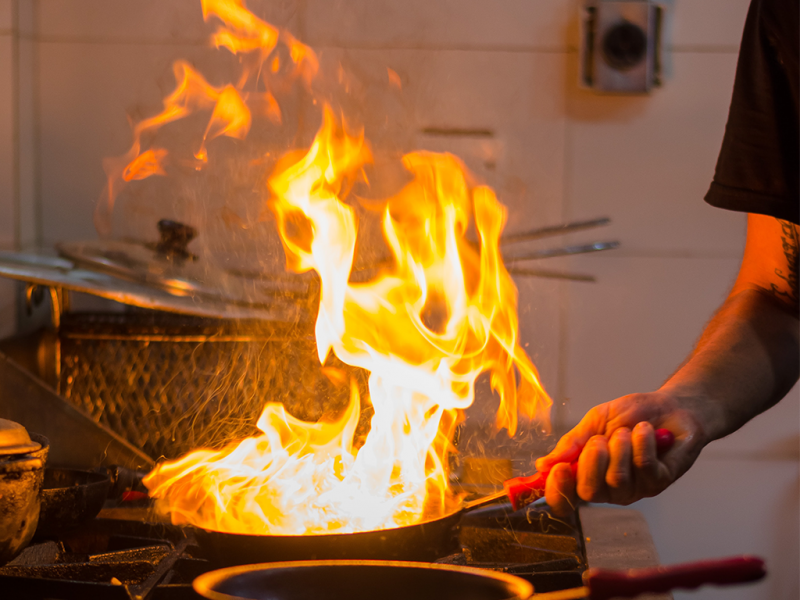 How many times do you think the R sound appears in this sentence?

“The first time I ever tried to fry chicken, I started a fire!”

The R sound is a tricky one in English. Not only is it hard to spot, but it’s also got a variety of pronunciations, depending on which accent from which country you’re talking about. The British/Australian R and the American R are so different they may as well be from different languages.

Native speakers of French, Spanish, and Asian languages have particular trouble with the R sound. There is no rolled R in American English, like Spanish and French, and the American R sound doesn’t even exist in most Asian languages.

At the start, it’s normal to have trouble pronouncing the R sound, and it just takes some time to notice the subtle differences and perfect the mouth movements.

In this article, we’ll look at exactly what you need to know to start correctly pronouncing the R sound with an American accent.

The Letter R in English

Perhaps /R/ is so tricky for non-native English speakers because it’s a liquid consonant, which means you use your tongue to partially block the air coming from your mouth, resulting in a resonant, vowel-like sound– the letter L is the same.

It’s also known as an alveolar approximant, but now we’re getting technical!

The reason so many English learners have a problem with the R sound most likely boils down to these few things:

It’s harder to spot the letter R compared to other letters, and sometimes the WR spelling, which is still pronounced as R, throws people off.

The R is always dependent on whatever letter is near or before it, which is itself dependent on the R’s position within a word.

3. The mouth movement for the American R sound is tricky

The tongue and jaw position required to make the American R sound doesn’t really exist in other languages, especially those in Asia, where they have sounds that are somewhat between L and R.

So, most English learners just aren’t used to it yet.

1.It has so many variations

Accounting for all varieties of English and accents worldwide, the letter R has at least eight allophones, which are variations in pronunciation. That means eight different sounds that all seem the same to non-native English speakers.

With so many regional variations, no wonder it’s a source of trouble for English learners, especially if your native language has an entirely different R sound.

2. It’s hard to explain to children

Some sounds are just easier to explain than others. Take the sounds like /B/ in ball and /F/ in fish, for example. They’re easier to explain to a child because you can show them how to put their lips together for /B/ or bite their bottom lip for /F/. The movements are easily exaggerated.

Children often have trouble with tongue placement, so the /R/ sound can come out like /W/ or /L/.

Apart from the R sound, English has more sound combinations, or minimal pairs, that are confusing for learners. Take a look at our Mastering North American English Pronunciation course that features high-quality, engaging videos designed to improve your accent rapidly.

Each video episode features practical instructions and real-life examples, and tips that you won’t find in language books. There’s even an entire video lesson on how to pronounce the letter R! Click here to get started today.

How to Pronounce the R Sound in American English

Your lips should be in a tight O shape, but they will vary slightly depending on which type of R you’re pronouncing.

All About the Letter R in American English

Let’s go over the three R’s and see them in action:

The initial R, which is at the start of a word or syllable, is always followed by a vowel. It’s the highest energy R sound and what you should try to master first.

Some phrases with initial R words:

You’ll always find the middle R with a consonant before it, and its pronunciation is influenced slightly by whichever consonant that is.

Some phrases with middle R:

“Our train was running late and we were just standing on the street frustrated.”

“I don’t trust him. He’s always trying to trick everybody.”

“I saw a car crash the other day while I was leaving the library.”

The final R, also known as the vocalic R, has a slightly different pronunciation than the other two R’s as it always has a vowel before it.

To pronounce the final R, you make a subtle /er/ sound, which we call the schwa sound, and hold the R slightly longer.

There are Five vocalic R’s used with vowels

Some Tricky Words to Practice

Distinguishing Between R and Similar Sounds

Confusing the /R/ and /W/ sounds is something that many English learners experience. The /R/ is so soft that it sounds like a /W/ at times.

The main difference is that you pronounce /W/ with your lips rounded, like the /U/ sound. You finish the sound with your mouth open, and your tongue relaxed. It should sound like “Wuh,” with the schwa sound.

As we’ve seen, the /R/ sound is made by keeping your tongue tensed in the middle of your mouth, and your lips close together.

Confusing the /R/ and /L/ sounds is mainly present with children, because they haven’t learned the proper mouth movement yet, and speakers from Asian countries, as most Asian languages don’t have one or either of the sounds at all! However, that topic is still very overgeneralized, and it varies even within dialects of Asian languages. Specificity is key when talking about a region with hundreds of languages.

The major difference with the /L/ sound is you pronounce it with a large flap of the tongue, almost like flicking it.

You can exaggerate the flap by saying “el-uh” and letting your tongue flick on the “uh” sound. Now make the “uh” sound very subtle while keeping the tongue flap.

As we saw above, your tongue should be tense and still while pronouncing /R/. You’ll feel the back of your tongue on your back teeth throughout the whole sound.

Try exaggerating the differences between the two sounds to get a good idea of the mouth movements of each.

Words that start with WR or contain RR in the middle are pronounced the same as a single R. You don’t roll your double R’s, like in Spanish, and for WR, you can just imagine that the W isn’t there!

You could consider the British and Australian R to be easier than the American R because it’s less vocalized.

The R sound for most Brits and Australians sounds like “ahh” and doesn’t require as much tongue or lip movement.

Learning something through reading isn’t enough, and you’ll need to practice so the habit of good R pronunciation sticks! Try searching for some words with all three types of R—initial, middle, and final—and practice saying them like a native English speaker.

Learning to pronounce the American R sound correctly will not only improve your fluency, but it’ll also make it easier to speak. As you practice the mouth movements and they become a habit, you’ll inevitably use less energy speaking. And hey, you may even feel more confident because of it!

Improving your R pronunciation is a small investment that promises a big reward, and soon sentences like “I regularly monitor the temperature in February” won’t seem tricky at all.

Remember to practice your pronunciation every day and listen to native accents often, so it becomes second nature!