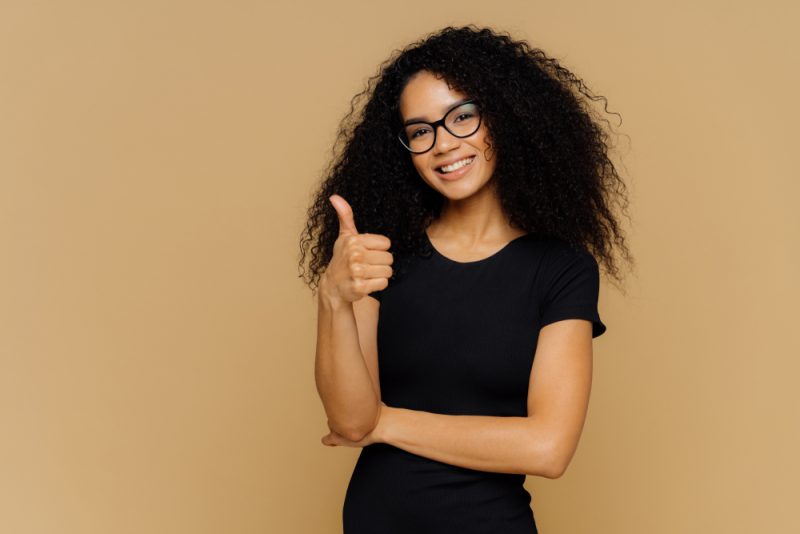 Imagine asking two people how they are, and both of them answer with, “I’m fine.”

However, Person A says this with a smile, making direct eye contact with you with palms open by his side. On the other hand, Person B looks away and shrugs while rolling her eyes.

“I’m fine” is an English phrase that sounds perfectly neutral in writing. But when you’re talking to people, the gestures that they make can add a whole new layer of meaning to their words. In this case, Person A seems to be sincere, while Person B seems more sarcastic or uncomfortable.

For this reason, being fluent in English isn’t only about knowing the vocabulary and grammar. You can take it up a notch by also understanding common English gestures.

The more that your gestures back up your words, the more trustworthy and approachable you’ll appear–and the more persuasive you’ll be at work. Pair this blog post guide with our free worksheet that’s all about connecting your ideas clearly during business meetings. When you combine the right vocabulary with English gestures, you’ll be able to deliver an impactful message. Scroll down here to download it!

From describing the agenda to setting the pace, you’ll get a solid grasp on how to use English gestures like a native speaker.

Gestures are simply movements of the body that communicate a certain message. The most obvious gestures are made by the hands and arms, but gestures made by other body parts are also meaningful. For example, you can already notice a lot based on a person’s facial expression or posture.

Although people can make gestures on purpose, these are often unconscious and automatic. (Try recording yourself on video–you’ll be surprised at all of the gestures that you’re making!) This is why they’re often an effective way to tell how other people are genuinely feeling.

Gestures are part of nonverbal communication. Psychologist Albert Mehrabian concluded that communication consists of the following:

Body language and gestures make up more than 50% of your communication. Your gestures might actually be speaking louder than your words!

Gestures can be different for each language too. English has its own unique gestures that might come off as strange when you use them with another language. For example, the English thumbs-up gesture is so widespread that it’s already been turned into an emoji. But while it’s generally taken as a positive gesture in English, it can be interpreted as being rude in other cultures.

If you’re using English in the workplace, then learning about English gestures is a must. Here’s why:

What if you could also master English gestures along with vocabulary? Then you’ll be really persuasive, with top-notch communication all around. Aside from getting your points across assertively, you’ll perform even better at work because you’ll find it easier to connect with others–whether in an office or at a video call.

Now’s your chance to achieve that. We’ve launched the Creativa business meeting mastery course, which features engaging, high-quality videos that dive deep into English gestures at work. Through realistic reenactments, you’ll get a firsthand view of how to seem friendly yet professional using your body language.

The course covers a wide variety of situations, from managing meetings to disagreeing effectively. All in all, you’ll learn about how to present your best self in English–complete with lessons on native English vocabulary and pronunciation. Curious about it? You can check it out with a free video here.

Essential English Gestures That You Should Know About

In this gesture, the hands are generally stretched out, with the palms facing up. You’ll often notice this when people are moving their hands while talking. On the other hand, you might also be sitting down with someone at a table and they’re resting their hands in this way. This signifies openness and honesty.

Tip: When you’re asking someone about their concerns or honest feedback, consider it a good sign if their palms are open.

If a person’s arms are crossed, it’s considered as closed body language, which implies defensiveness or a refusal to connect. However, it isn’t always black-and-white. Crossed arms can imply that the person might be feeling tense, afraid, or uncomfortable, but it’s also connected to problem-solving and perseverance. The person might just simply be trying to think their way through a problem.

Tip: Since other people can interpret this as defensiveness, avoid crossing your arms when you’re in an important discussion.

You’ve probably seen people tapping their fingers or feet repeatedly beforemaybe while listening to a presentation or sitting at a prolonged meeting. Here’s what this gesture is saying: “I’m feeling impatient.” People tend to do this because of either boredom or anxiety.

Tip: Next time that you’re speaking to a group, try to be observant of these cues–and adjust your presentation to make it more engaging.

When someone’s trying to explain their ideas to you, you can make them more comfortable by nodding along when they pause and saying, “Yeah,” “Go on,” or “Mm-hm.” Nodding means that you agree with what the other person is saying. You might also nod while making verbal statements of agreement such as “I see your point” or “That’s true” for emphasis.

Tip: Although this might seem like a universal gesture, it actually isn’t. Double-check before using it in a foreign culture–some Eastern European countries interpret nodding as a “no”!

In the English-speaking world, smiling is usually seen as polite, and it helps make other people feel at ease. Whether you’re saying hello to a coworker or holding a meeting with a sponsor, smiling every now and then can break the ice.

Tip: One of the most natural times to smile would be when you’re thanking someone. For example, you’ll sound more sincere if you smile while saying, “Thank you for taking the time to meet about this.”

Shrugging is when someone raises their shoulders slightly then brings them back down again. It’s a very casual gesture. You might not catch it at formal meetings, but if you’re with coworkers that you’re comfortable enough to be joking around with, shrugging tends to be more common.

What it communicates is “I don’t know,” with the implication that they don’t really care too much about it.

Tip: Shrugging is fine with friends, but avoid shrugging when you’re in a serious business setting.

In the English-speaking world, the thumbs up gesture appears more often on chat messages as an emoji. Another common scenario is during group video meetings, when one person’s asking if everyone else agrees with a proposal or if everyone’s free during a certain time. Since it’s hard to talk all at once during video meetings, people simply use the thumbs up gesture to show that they’re okay with it.

Tip: The thumbs up gesture can be offensive in certain countries such as Iraq and Russia. If you’re communicating in English with someone who isn’t a native speaker as well, make sure that it’s a regular gesture in their culture of origin too.

Native English speakers often maintain eye contact while talking–in other words, they look directly at the other person. Avoiding eye contact can make it seem as if you’re hiding something or you’re feeling intimidated.

Tip: During business meetings, hold eye contact every now and then with whoever you’re talking to. This builds a sense of connectedness, and conversation will flow more easily. However, don’t overdo it–too much eye contact without any breaks might make you seem way too aggressive instead!

A high five can be a greeting as well as a congratulatory English gesture. For example, you can shout out “High five!” to a friend while raising your open palm. Your friend then slaps their palm against yours. A more casual version of this would be the fist bump, where people touch their clenched fists together.

Tip: When someone from your team does a great job, you can congratulate them by giving them a high five. Since this is a casual gesture, it’s more appropriate to do it with coworkers that you’re on friendly terms with.

Putting your index finger to your lips is a widespread English gesture that means, “Please be quiet” or “Tone your voice down.” At work, a colleague might use this gesture when they’re on a video call and can hear your voice in the background or when there are people having a meeting nearby. A stronger, more blunt version of this would be drawing your thumb and forefinger across your lips, like a zipper across your mouth.

Tip: As your first choice, it’s always best to go with a simple, “Please tone your voice down” since this gesture can come off as a bit abrupt.

Native English speakers sometimes cross their index and middle fingers together as a way of saying good luck. You can pair this gesture with statements like “I hope everything goes well!” or “Best of luck, fingers crossed.”

Tip: This gesture works whether you’re wishing good luck for yourself or for others. In a professional context, it’s rare to see this over video calls. Instead, it’s more typically used in person by coworkers that you’ve collaborated with closely and who know you fairly well.

Being aware of these essential English gestures can lead to a huge improvement in your communication skills in English. Let’s explore how you can use English gestures in your everyday work interactions:

Although you can’t always pay attention to your own gestures, a general rule of thumb is to adopt open body language, especially when you’re in meetings or one-on-one conversations. On a nonverbal level, you’re signaling to the other person that you’re confident and willing to hear them out.

Here are the specifics:

Using the appropriate English gestures has a strong effect on how others see you. When you combine this with confident business vocabulary, people are likely to be more open to your ideas, and your presentations become even more engaging.

Scroll down for a free PDF worksheet with helpful exercises on how to discuss your ideas effectively and emphasize your points. You’ll get to practice with professional English phrases and expressions that come up often–and you’ll be able to apply these right away the next time you hold a meeting.

Be aware of others’ gestures

Communication is a two-way street, so understanding other’s gestures will refine your own communication and put you in sync with them. This is invaluable, especially when you’re doing sales, negotiation, or even conflict resolution. When you’re sensitive to someone else’s gestures, you’ll know where to steer the conversation.

Be on the lookout for these gestures:

While all of these gestures have common meanings, you’ll still have to take into account what the person is saying along with what’s actually happening. In any case, it doesn’t hurt to adjust your approach then observe if their body language becomes more open and responsive.

Communication isn’t limited to words. When more than 50% of communication is nonverbal, your physical gestures might even be sending out a stronger message than the words that you’re saying.

To strengthen your message in English, your words and your gestures would have to match up. Being mindful of other people’s gestures also makes you a better conversationalist, which can advance your career.

Are you ready to deepen your fluency in business English with the right gestures and body language? Our Creativa business meeting course tackles every aspect of professional communication, including English vocabulary and soft skills. Each video episode is carefully curated, and you’ll see numerous play-by-plays of how exactly to use English gestures to express yourself with confidence. To get started, you can access a free video here.